Posted at 12:43h in Green Building by admin

by Kate Ramsayer/ the Bulletin 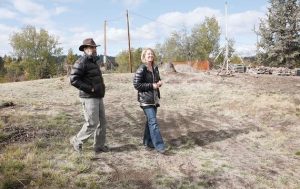 Editor’s note: Tom Elliott and Barbara Scott invited The Bulletin to follow their green-building project from start to finish, to share their goals, decisions, costs, concerns, problems and achievements, and to be an open book on what it takes to build such a home.

The Bulletin is following the couple’s project through periodic stories. In this installment, Elliott and Scott discuss their decision to redesign the home, reducing its size by a third and dramatically lowering its cost. What hasn’t changed is their commitment to build a home adhering to the strictest green-building standards available.

More than 20 months after they started planning to build an extremely energy-efficient, environmentally friendly home on Bend’s west side, Tom Elliott and Barbara Scott are going back to the drawing board.

After receiving construction cost estimates of $600 per square foot — or about $1.8 million to build the 3,000-square-foot home, almost double the original budget — the Bend couple and their team of designers and green consultants are now thinking smaller and simpler. Elliott and Scott are reducing their home size by a third and hoping to shrink their budget by about $1 million.

However, they’re still dedicated to building the greenest home possible by following the guidelines of the Living Building Challenge, a strict set of criteria that requires a home to make its own energy, collect its own water and use only Earth-friendly building materials.

While two commercial buildings have been certified as meeting the challenge, only one residence worldwide has been partially certified, but it didn’t meet the requirements in all six challenge categories, which Elliott and Scott are aiming to do.

“We still really believe in the Living Building Challenge as an emerging international standard,” Elliott said, and the Bend couple wants to be a part of that. “If it’s really going to come forward as an important standard, there’s got to be some working, operating examples for people to see.”

Added Scott, “My philosophy right now is this will be the building standard of the future. I really believe that.”

But the couple decided the most cost-effective solution to getting there was to redesign, Elliott said.

“That’s been a very painful decision to come to,” he said.

Part of the reason for the escalating costs, the couple said, is that when they started designing the house, they did not know about the Living Building Challenge, so they were planning to build in step with other green standards.

But eight or nine months into the design phase, they decided to go with the challenge and started adapting the house accordingly, adding elements to the original design.

“On reflection, we have to admit that was a mistake,” Elliott said.

The Living Building Challenge requires builders to collect rainwater for household use, for example, but Elliott and Scott’s plans called for complicated roof lines that would have needed multiple spouts, filters and systems. And the original design for the property had a large cistern separate from the house, which required additional pumps and pipes, Elliott said, whereas the new plans could simplify things by putting the cistern in the basement.

About a year into the process, they started feeling like their planned home was too big, Scott said. They want the home to inspire others and showcase elements others can copy, but felt it was getting too far out of reach for most people.

“We were feeling like this is like a big home on a hill,” she said. “It doesn’t really fit. … We’re going to build something that I think is more modest, more affordable.”

In December, the builders asked subcontractors for bids, Scott said. When the bids came back, instead of the budgeted $350 per square foot, the estimates were closer to $600 a foot.

“It came back just way over. Everyone was shocked,” Scott said.

For about a month over the holidays, the couple put the project on hold, she said.

“We’ve been through the gamut of emotions, from just totally shocked, floored … to being very angry — who can we blame, it doesn’t seem right.”

So now the goal is to design a new house that is about 2,000 square feet and around $325 a square foot, Elliott said, excluding the added cost of the energy- and water-efficiency systems.

In hindsight, Elliott said, the whole team — including him and Scott — probably should have tracked costs more closely during the process.

Earlier this month, they called their design and consulting team together to figure out how to reduce costs and decided to design a smaller home.

“We’re actually very excited about the opportunity to redesign, given what we’ve been able to reflect on,” Elliott said. “We’re going to redesign something that’s even cooler than the one we already have. It’s going to reflect more who we are and also a much deeper understanding of the commitment to net-zero energy and water (use).”

The new house will be closer to 2,000 square feet, she said, probably eliminating one of the two offices and shrinking the size of the mudroom, den and other rooms.

“We don’t need (the size) we were looking toward with this other design,” she said. “We really believe that’s important.”

But they’ll keep a larger space for entertaining, she said, since they enjoy having people over. One way to fit that into a smaller home could be features like a covered deck.

The new design also will probably include fewer windows and a simpler way to collect rainwater.

It also will include more passive solar features, Elliott said, with plans designed to use sunlight to heat the house as much as possible in winter.

They’re sticking with the Living Building Challenge, which has strict requirements for local, nontoxic building materials as well as standards for generating all the energy a house needs and collecting all its water on-site.

“Downsizing a house is the single most important thing you can do to save materials, save energy and to save money,” he said.

Other things to do are to reduce the window area, since windows provide significantly less insulation than walls. Insulation is important and with a smaller house, builders can use less expensive types, like fiberglass or cellulose, instead of spray foam.

But mostly, he said, it’s a matter of choice — people could spend money on granite countertops, or more space, or they could put that money in to making a home energy efficient.

“A lot of people say green is more expensive, but it isn’t really,” he said. “It’s the choices you make.”