Bend Couple is Aspiring to Harness the Wind

03 Aug Bend Couple is Aspiring to Harness the Wind

by Kate Ramsayer / The Bend Bulletin 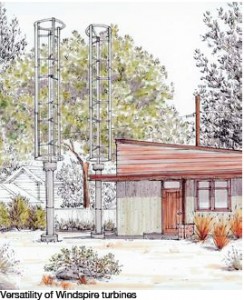 The roof of the super-efficient greenhouse Tom Elliott and Barbara Scott are designing is slated to be covered in solar panels to produce electricity. But the Bend couple is hoping to take onsite energy production on the northwest Bend property one step further.

They’re proposing to install two vertical wind turbines to capture gusts that blow across their lot. City and utility officials say the turbines would be the first such structures within the city limits.

“We’re trying to build a home that’s net-zero energy,” to produce all the power the house would use, Elliott said.

The wind project found support at Tuesday’s meeting as well, including with neighbors Peter Geiser and Maureen Sweeney.

“These guys are doing so much,” Sweeney said. “They are mentoring people to think about this.”

And future neighbor Garcia, who came to the community meeting with concerns about the noise and aesthetics of the turbines, said afterward that he favored the project, too, once his questions were answered.

“I was a little concerned with the aesthetics,” he said. “They look great. It’s kind of a structural piece of art.”

Heidi Kennedy, senior planner with the city of Bend, said Elliott and Scott won’t apply for a permit for the turbines until the Shasta Place community has finished reviewing the proposal, and the couple has tried to address any concerns.

“It’s important to address any issues with the neighbors before you come in and apply to the city,” she said. “If you have some issues, maybe you can resolve them.”

Once the couple applies for a conditional-use permit for the wind turbines, the city will examine the size, location and topography of the project, as well as any impacts like noise, light, glare or odor on neighboring properties before deciding whether to issue the permit.

One of the goals of the project, Elliott said, is to make it easier for other people to do similar wind projects later.

“It’s evolving into something that is attractive, and relatively noninvasive,” he said, adding that he and Scott are “navigating that path with the city, so people down the road will hopefully have an easier time making it work.”

But before the couple starts installing the devices, Elliott and Scott have to get the OK from the city, which doesn’t currently have specific wind turbine regulations and will instead require a conditional-use permit for the structures. Elliott said one of the couple’s goals is to lay the groundwork that will make it easier for others to install wind turbines within the city.

Before they can apply for the turbines, Elliott and Scott are required to hold a community meeting to address concerns of nearby residents, which Elliott, Scott and their team of consultants did Tuesday. Several of the eight or so residents who attended had questions ranging from the safety of the turbines to their noise and visual impact. 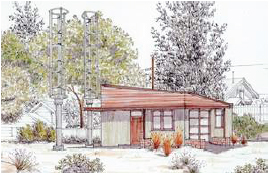 Elliott kicked off the meeting with a description of the wind turbines, called Windspire.

The cylindrical devices are 35 feet tall, including a 15-foot base, and about 4 feet wide. They’re not scaled-down versions of the propeller turbines found on wind farms, but instead have vertical airfoils that catch the breezes.

But sounds — including hisses, hums or white noise — were among concerns of future neighbor Brian Garcia, who attendedthe meeting.

“My big concern — I’m going to be across the street — is the noise,” Garcia said. “That has been top on our list.”

The turbines produce noise that is about 6 decibels above the background, less than a whisper, said Mark Patt, CEO of EverGreen Energy, a Bend company that distributes the turbines.

Standing under some turbines that had been installed in Ashland, he could have a conversation with the person next to him in a normal voice, he reported.

The visual impact and siting of the turbines, and potential safety issues, concern Scott McCaulou and his wife, Bulletin reporter Lily Raff, who live directly behind the site and will overlook the structures.

“We’re the ones that are going to be looking at the two towers,” McCaulou said at the meeting. “It does loom over our lot.”

He questioned the safety of the turbines, and asked what would happen if gusts exceeded their rated wind-speed capacity of 105 mph and whether they had previously been installed in dense residential areas.

Patt said the turbines have a braking system that slows them down when the winds exceed a certain speed. And if the winds are serious and pose a threat, workers will come out to the site and lower the turbines.

The turbines have been installed at universities, including at the University of Kansas architecture school, along a city street median and at the Adobe corporate headquarters in San Jose, Calif., according to Windspire.

McCaulou also questioned why Elliott and Scott were putting in a redundant power supply. 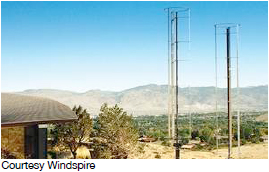 The siting of the wind turbines also was a concern, McCaulou said — although they would be set back from the cliff at the front of the property, blocking them from view on Northwest Shasta Place, the turbines will be in front of neighbors to the other side.

“It definitely impacts you guys, and I wish it didn’t,” said Elliott, who plans to meet with McCaulou and Raff further to discuss possible ways to address their concerns about the turbines’ safety and location.

He later added that he understood the concerns about the visual impacts of the wind devices. 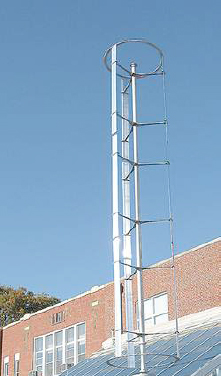 If everyone had wind turbines in their yard, he would probably have concerns about visual impacts, too, Elliott said — and he doesn’t like the fact that a wind farm is going in next door to his property in Montana, with a 40-story tower above his house.

But small-scale wind projects like this have potential as a decentralized power source, he said.

“I just think we have to continue to explore many different alternatives with energy,” he said. “It’s not a one-size-fits-all thing.”

One turbine costs about $17,000 installed, Patt said, and Elliott said he expects each will cost $7,000 once tax credits and other incentives are included, although that could change.

Typically one turbine can provide 25 percent of the power for an average house, according to Windspire’s figures. However, Elliott estimated that with the less-than-optimal wind at the Bend site, as well as the home’s energy-efficient design and appliances, he expects the two turbines to produce between 20 and 30 percent of the power needs of the home and outbuildings.

Elliott and Scott are trying to meet the strict environmental and energy-efficiency requirements of the Living Building Challenge. Among other things, the challenge requires participants to generate all of their power on-site using renewable energy. Most of the couple’s power will be from solar panels, but the plan also calls for wind power.